Toyota Belta the successor subcompact car is the broader version of Corolla. Toyota Belta Price in Pakistan 2023 is available here. Toyota Belta is also called Toyota Yaris in North America and Australia however South Asia knows it as Toyota Vios. The 1st Generation of cars is capable of a quality experience. It shares its exterior design language with Toyota Vitz. The aggressive front look holds the end and houses trapezium-styled upswept headlights, a grille, dual air intake, and a rectangular intake on the large front bumper. Toyota Belta rear side gets a chrome piece running the length of the trunk, trapezium-styled sleek side swept taillights and a large rear bumper.

Toyota Belta price starts from 15 Lacks to 16 Lacks as well as this is an imported vehicle and import from Japan. On the other hand, the Outer looks the same but the engine Capacity is different like 996Cc and 1296Cc. 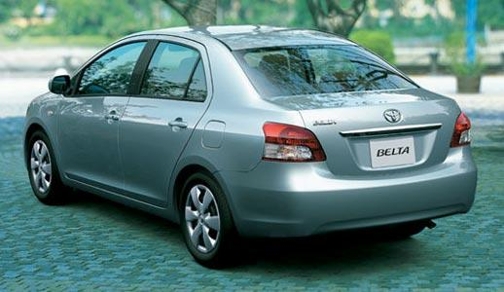 Toyota Belta is powered by a 1.3 Liter DOHC 16-Valve VVT-I Inline-4 cylinder engine. It is mated to a four-speed automatic or five-speed manual CVT automatic transmission. The powerful engine can achieve an average of up to 14kmpl which makes for an estimated driving range of up to 588 km. Toyota Belta gives decent ride quality and great performance with a top speed of 180kmph.

These are all the features of this bike.

The specifications of this bike are as follows:

All specifications and features of the Toyota Belta are mentioned as well and people can get the Toyota Belta Price in Pakistan 2023 that is given. Moreover, this is imported and comes in used condition.