Suzuki Sprinter ECO Euro2 2023 price in Pakistan specs features mileage detail pics. Changing climate has posed serious threats to every field of life. Keeping this in view, Suzuki launched an environment-friendly motorcycle to attract more customers. Suzuki Sprinter Euro2 is launched and its model is available in the market now. A Polyurethane foam element has been introduced in the bike which makes it protective against polluting the environment. More attractive than Suzuki Sprinter Eco, Euro2 has better sound and fuel consumption than other competitors of its type. It is known for its powerful and durable engine. Originally, it is available in red and black color, but can be altered.

It has a four-stroke engine using an air-cooled system for cooling purposes. A four-speed transmission system comes in act to ride the bike optimally. Popular among a large number of people, the machine can produce a speed of up to 110 km/hour. The most important feature of the bike is that it remains smooth while moving at a speed of 80 to 85 km/hour, which is a drawback in the number of bikes that start vibrating. The secret of smoothness resides in the strong frame of the motorbike. 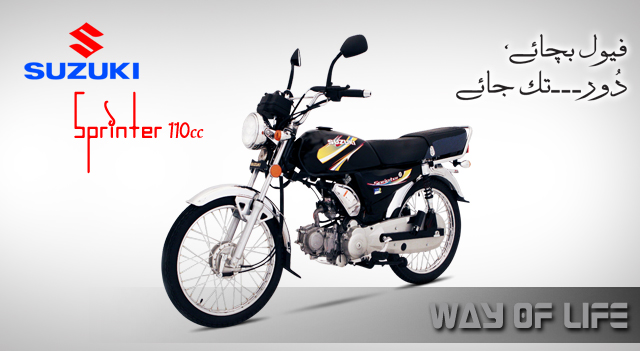 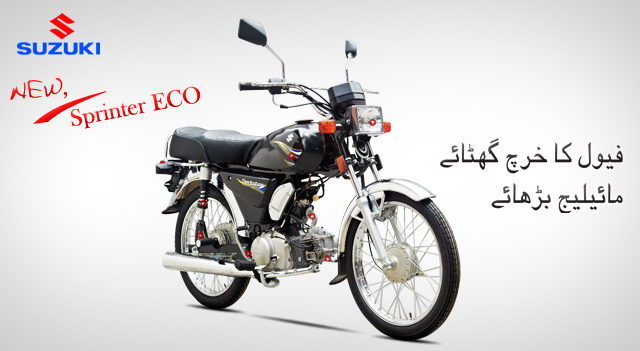 Starting with the main features, it has a large and dynamic tank with a capacity of 10.5 liters. The reserve capacity is about 2 liters, which is more than other bikes that have a capacity of 1.5 liters. A kick starts with an electronic ignition mechanism that can be exercised to start it to set it in motion. A high compression ratio is the key feature of this bike, which sets it more prominent.

High compression is a characteristic of internal combustion engines that highlights the ratio of the volume of the combustion chamber, from its largest capacity to its smaller capacity. As compared to the overall grace, the headlight is not suited to the look of the bike. It has an old traditional rectangular shape. However one can alter it according to his desire. The rear light is quite small but stylish. Indicators are normal and though not stylish in shape. The seat is wider and longer, and the leather covers over it makes it more comfortable for the rider. The seat for the rear rider is much wider.