FAW and Dongfeng are China’s two oldest state-owned automobile manufacturers. Both companies are ready to build joint innovation center and signed an agreement in February 2017. They will work in five areas including fuel cell technology, smart connectivity and testing facilities.

Chairman of FAW group corporation, Xu Ping said that the cooperation will strengthen respective competitiveness of the two firms and also said “it is a visit that open up further cooperation in the future, and will surely be cherished by both sides.” According to plans both FAW and Dongfeng companies will invest CNY10 billion (USD 1.45 billion) in an NEV firm with other investors. 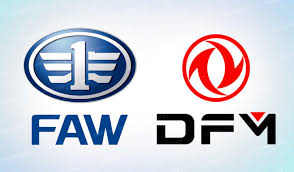 FAW and Dongfeng will explore ways in research and development of new energy vehicles and other fields and both automakers have highly profitable joint ventures with global automakers. FAW is based in the northeastern city of Changchun. It is the joint venture of Germany’s Volkswagen AG and Japan’s Toyota Motor.

FAW is well known as its principal products are automobiles; buses; light, medium, and heavy-duty trucks and auto parts. However, the Dongfeng Company is located in the central city of Wuhan. It is the joint venture of France’s PSA Peugeot-Citroen and Japan’s Honda Motor. Dongfeng is also the leading company of commercial and consumer vehicles and manufactures of parts and cooperates with foreign companies.